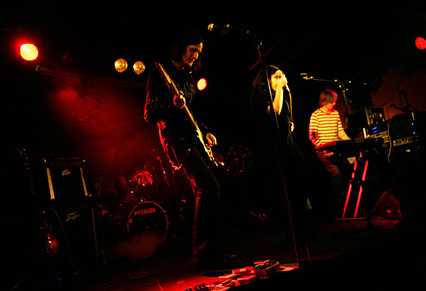 Royal Lips probably is a relatively new acquaintance to many. The band recently released an Ep which carries the name Broken Record.

I became curious about the music of Royal Lips and thought it is the time to sit down and interrogate the band about their doings. I was invited for a cup of coffee by band members Thom and Kitty. We started to discuss what is the concept called Royal Lips.

I was curious where the name Royal Lips comes from. I associated it with Flaming Lips and a Finnish retro chocolate candy bar called Royal. Thom cleared the issue for me.

- There is no exact story or meaning behind the name. The name came to mind in a beer tent at a rock festival. We were in a good groovy mood and the name Royal Lips just sounded cool.

So was the band formed in a beer tent too?

Thom gives a laugh.
Well, all begun as a side project in year 2006. Phiit and I had been playing in other band projects together and then Kitty joined to the fellowship of the band.

Kitty: - Oh the band wasn’t formed in a beer tent. We had a meeting at a nightclub and I thought it would be nice to start this kind of group. So we started to do things together and songs begun to evolve spontaneously. Band found its expression.

Thom: - In fact it was quite challenging to get Kitty to the rehearsals because she had no background as a rock singer. She had sung in church choir earlier when she was younger.

Well, where comes your inspiration? Is there any bands you get influences from?

Kitty: - We grew up in the 90’s so I guess it’s natural to have some influences from there.

Thom: - Yeah of course we each have our own subconscious influences which altogether builds a Royal-like mess. It’s hard to specify certain bands but I’m sure we will be compared to Yeah Yeah Yeah’s because of our vocal/guitar/drums line-up.

So could you describe your unique style?

Thom: - Well I guess our style is in the context of modern indie rock music, but it’s quite hard to categorize it really. It's a cliché but it’s true. We just play simple melodic rock with punk attitude, that’s all.

Thom: - That’s challenging and because of that we have to make tough musical decisions. Songs don’t include anything unnecessary. We have erased all useless extra stuff that don’t fit in the big picture. In addition to that, all instruments have equal role. Simple is ideal. For example, I play the melodies and basslines at the same time ‘cause of the lack of the bass player. Kittys voice brings some soul to songs and is an instrument among the guitar and the drums.

What kind of process making music is for you?

Thom: - I bring the songs in nearly finished and Kitty writes the lyrics. After that we go to our rehearsal space and introduce the songs to Phiit. Everybody participates to the composition process. The songs are usually finished pretty fast. After we have played the song together about three times, it’s ready. We don’t fuck with the songs too long.

Kitty: - Yeah, many songs have come by improvising. We like to be in creative state of mind.

Let’s talk about musical culinarism. What kind of food or dish Royal Lips would be, if you had to describe your music as one?

Thom:- Chicken noodles with sardines. Something affordable and simple but with a finer touch.

There is some punk nuances in your music. How this can be heard on Broken Record?

Kitty: - We taste and sound home made.. I think you can’t hear traditional punk sounds there really.

Thom: - In general, the punk in our music means that there aren’t limits or rules what we can do. There’s no do's or dont's. If death metal growling fits into a song, then we do it. Hah, I would really like to hear that.

Broken Record. Where does the title come from? Do you break records occasionally?

Thom: - Haha. The title reflects the sound. Raw and dirty guitars, bongo drums through distortion pedal, and split emotions. Something like that. We were supposed to make it even lo-fier at first but it turned out to be softer, and even commercially viable, I think.

What is the direction with new Ep? What elements it consists of?

Kitty: -  It has catchier melodies, which hopefully tempts more listeners. Our fellow buddy Markku the Mystery Tiger played keyboards on the record, colouring the music, so it’s more layered.

Thom: - Bass guitar wasn’t recorded at all. On last Ep there was some hidden bass line tracks. All in all, the atmosphere is more lighter and still more versatile than in debut Ep.

What kind of  recording process the Broken Record was?

Thom: - The recording process went quite fluently, except the guitars in which we spent more time to achieve sound we were comfortable with. I must admit the exact vision with guitar sound was blurred because of the diversity of the songs. It was challenging to achieve harmony between the tunes.

Who was in charge of the technical stuff? Who was the sound police?

Kitty: - Markku the Mystery Tiger mixed the Ep. We were all producers. Mastering was done at the Virtalähde Analog Audio studio.

Can you enlight the background or the story behind  the songs?

Thom: - At the moment the songs start to feel a bit old for us, so it’s impossible to remember where they came into existence. About Mary Has To Die I must say it was kind of a tribute to Sonic Youth which is important band for us. Truckbitch was  inspired by Kittys lyrics and discussing what kind of  mood they would need.

Kitty: - My lyrics come from associating freely. Everyone can find something for themselves. I like ambiguous lyrics.

What kind of  live band are you?

Kitty: - Line up is in metamorphosis. In addition to trio line up, we ask musicians from local music scene in every now and then to join us on stage. Sometimes we play as a trio. Everything is possible in Royal Lips’s gigs. We play songs more freely live by jamming, and sounds are surely heavier and rawer.

What about the future?

Kitty: - We have worked on a new material and I think there is enough even for a full lenght album.

Thom: - We would like to do more live shows. Royal Lips is still unknown outside our hometown Kuopio. And yeah at some point we will do new material. It will be much more different stuff than the last Ep. We always aim for musical evolution.

Do you want to add something? The speech is free.

Thom: - Check our Myspace page, have an open mind and come to see the live shows. And if you like the music, Broken Record is available worldwide via Record Shop X. 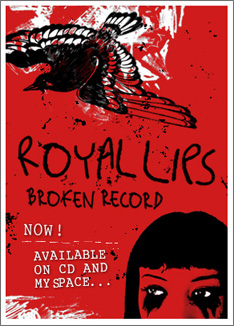